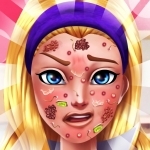 Barbie is a superhero! A super evil witch put some curse on her face, and she's going to give a payback to her. But she can't go with that face, of course. Help her cure all those awful things on her face, put some make up and new heroine clothes, then give some revenge to the super evil witch! Barbara Hero Face Problem is a terrific game which you can play for free in in friv2016.com. With Barbara Hero Face Problem game, we supply many cool Friv 2016 games to play at no cost.

Use Left Mouse button to Play