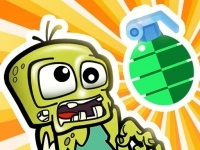 81%
Instructions
How to Play?

It's time to shoot the zombies, all you have to do is shoot, the candies will fall out of the pocket of zombie puppets as you shoot. Collect all the falling candies and buy new weapons. Eight crazy guns waiting for you. In this game, knives, pistols, laser guns, grenades, machine guns, electric plasma guns, and molecular explosives, such as weapons, you will have a lot of fun in endless levels. Pinata Zombie Hunter is a terrific game which you can play for free in in friv2016.com. With Pinata Zombie Hunter game, we supply many cool Friv 2016 games to play at no cost.