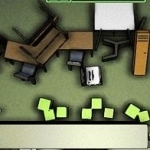 You are being chased by a horde of Zombies that are out to eat you. You need to survive and do everything just to get away from them. The terrain is your friend, barricade yourself, try to kill as many zombies as you can until you escape! Play Zombie Defender online at friv2016.com. You can play it in fullscreen to have fun with it. Zombie Defender is a great Friv 2016 game to play with no cost.